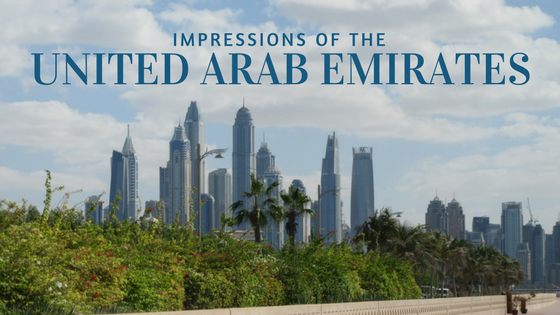 It took a long minute to press the “purchase” button. Once the mouse clicked, there was no turning back and my bank account would be depleted of a thousand dollars. I would have no choice but to take my first international flight halfway around the world to the United Arab Emirates. Abu Dhabi, to be exact, with a planned visit to Dubai and Al Ain.

Nine months later, I was on an airplane ready to make its way to my first stop where I debarked on a thirteen-hour adventure 40,000 feet above the earth’s surface. That Monday morning it felt like my stomach had produced a burrito stuffed with excitement, nervousness, and anticipation.

If someone had told me I would fly to a foreign country by myself, I would have told them they were crazy. See, I was one of those kids who didn’t like doing things by themselves. I didn’t like playing Barbie alone or knocking on neighbors’ doors to sell the current school, or church, fundraiser. I’m old enough to admit that I got my older sister in trouble when she didn’t want to do anything with me. It’s ironic that I’m unmarried at 50 and have done many things by myself, including a move to New England where I had never been before. But when my friends moved to Abu Dhabi, I knew it was an opportunity not to miss.

All throughout this adventure of international travel, I kept a journal. I didn’t want to forget anything. I not only recorded what we did but also my impressions of the culture and atmosphere of the UAE.

How Safe & Secure It Felt
The first order of business upon deplaning was to get a travel visa. I was excited to get the first stamp in my brand new passport. Once there I discovered that before receiving that coveted stamp, I had to do a retinal scan. This trip was full of firsts for me, and a retinal scan certainly fit the bill and caught me off-guard. At that moment, I knew this country didn’t mess around with security. I got my scan and visa stamp, then off I went to baggage claim. When leaving for the United States, another retinal scan and two security checkpoints were on the agenda. The Abu Dhabi airport checkpoint and the U.S. checkpoint, which was after customs. (Abu Dhabi is one of a handful of international airports that have a U.S. Customs facility.)

The lobby of our hotel in Dubai. A scene from Mission Impossible: Ghost Protocol was filmed here.

The trend with malls in America is that they’re dying off. Not so in the UAE. Every mall we went to—there’s at least one in every large city—was big and had many high-end stores. Stores like Cartier and Tiffany. But the one thing I noticed was their security. At malls in the U.S., security guards walk around. They may also do that at the UAE malls, but there are those who are positioned at certain places, especially the entrances. Yes, they had security “cops,” but they also filled a customer service role. As soon as we walked in the door of one mall, a security guard walked over and offered us help. He was also helpful in giving me instructions on what areas I was allowed to take pictures. (I had just taken a picture of some really cool dresses I liked.) My impression was that these guys were not the average “rent-a-cop” kind of mall security.

Hotels. At every hotel we stayed at, every person staying in the room had to present some form of identification. No matter whose name was on the reservation. For me, it was my passport. For my friends, it was their residency ID cards. While this surprised me, it didn’t upset me. It was one more thing that made me feel safe. 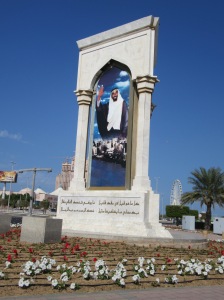 In Abu Dhabi, this monument of Sheikh Zayed, the founder of the UAE, was in a prominent location. (I thought he looked a lot like Jamie Farr.)

National Pride
Now, this impression may be due to being there just days before celebrating their 46th birthday as a country when Sheikh Zayed took action to unite seven separate emirates. But there were flags and decorations everywhere. There were also large pictures of Emir (President) Khalifa displayed. In my short time there, I learned a lot about the country’s history and the royal family. Buildings would have their own light shows. The displays, the lights, and decorations weren’t just in the capital city of Abu Dhabi, but also in Dubai and Al Ain. I was a little disappointed that I didn’t time my visit to be there during their celebration.

Customer Service
It seemed that those who provided some sort of service were quick to greet with a smile and open doors. Even after a few days, I still wasn’t accustomed to having someone open the car door for me. When we pulled up in front of our hotel in Dubai, I had turned for a second to grab something off the seat and jumped a little when I turned back and saw a guy at my window, ready to open the door.

At restaurants, the customer service was a little different. They were quick to greet and seat you, but unlike the U.S., they weren’t quick to check on the tables. And the customer has to ask for the check. It just didn’t seem they were concerned about how many tables or people they can rotate through the door. That’s definitely a different philosophy than America. When I was a waitress—nowadays called a server—there were actual time guidelines. Thirty seconds to greet once they walk in the door. One minute to seat them. Five minutes to take their order. Two bites to ask if everything’s okay. Check at the table before the last bite is taken. And so forth. Timetables that were unrealistic. It was like time wasn’t an issue for the UAE.

International travel isn’t for everyone. I love to travel, which I attribute to my parents. By the time I graduated from high school, I had been to every state in the continental United States except for the West Coast, the Northwest, and New England. Since then, I have crossed off New England and California. International travel was something that eluded me until I went on a couple of cruises. But stopping at a cruise ship port isn’t the same as flying to another country. After the return fifteen-hour flight, I’m not quite sure that I’m cut out for flights over eight hours. If you are an international traveler and have never visited the United Arab Emirates, it’s a place you’ll want to add to your travel bucket list.

Which international locations would you like to visit? Where would you recommend I travel to next? 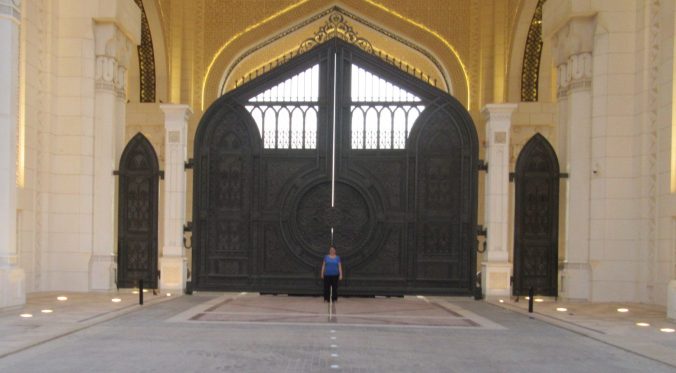 Little ole me in front of the gate at the Presidential Palace in Abu Dhabi. The size of this gate was so intimidating, I walked up to it as if I were going before a firing squad.