Father’s Day is rounding the corner, and I realized I’ve written a couple of blogs about my mom but not my dad. (You can go here to read the most recent one on Mom.) While he had his faults, my dad was a great guy. He quit high school to join the Army during World War II, and then ended up being discharged months later due to flat feet. Or at least that’s the story I’ve heard all my life. Dad was one goofy guy and loved by many. Like a typical teenager, I thought he was embarrassing. (Sorry, Dad.) During one of his college visits, I had friends say to me, “Your dad is so funny.”

“Really? Are you sure you’re talking about MY dad? The gray haired hillbilly with no teeth?” They confirmed it was the right guy. That was probably the moment my embarrassment started to turn into admiration.

His life was filled with love. Ever since his death in 1999 at the ripe age of 75, I have reflected about the things he loved, several of which he passed on to me. 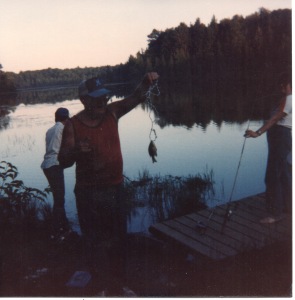 Look at that whopper of a fish!

Love of Fishing
Now I can’t say that I’m a great fisherman. That would be a bigger fish tale than, “I had one THIS big and it got away.” But I loved the times he took us fishing. He showed me how to put the worm on the hook and how to cast the line. A lesson that didn’t take very well since I hooked myself on the back of the knee once. But he was there to take it out and tell me I was fine. It was more than the quality or quantity of fish we caught. It was the time spent together that was invaluable.

Love for People
I think I felt embarrassed by my dad because he knew no strangers. Me, on the other hand, was so shy I barely talked to people I knew. And it wasn’t just that he would talk to anyone. He would talk about anything and everything. Basically with dad, what you saw was what you got. He didn’t put on pretenses and didn’t try to be something he wasn’t. This is something I hope I have achieved in my life.

Love for God
This is probably one of the most treasured aspects about my dad that I loved. He wasn’t a preacher, nor did he try to talk people into following Christ. He just loved them through his actions. He helped numerous people when they needed it, whatever the need. It was the only thing that came before his love of family. (I’m smiling right now just thinking about this.) It was an unusual occurrence if Dad didn’t have tears in his eyes when people were being touched by God at a church service. His lips would quiver, and he’d get a little chuckle in his throat. I hate to admit this in such a public manner, but I’m the same way when it comes to God’s presence touching people’s lives. (Without the quivering lips, though.) Even though he was a talker, he wasn’t much for talking on the phone. Unless he had just gotten back from a church men’s retreat, and then I could hardly get him off the phone. (And now I’m starting to cry.)

Love for Family
I don’t think there was anything he wouldn’t have done for his girls. The poor man had to live with five women, fortunately only four of them at a time. (As if that makes it  any better.) With a seventeen-year gap between oldest and youngest, he basically raised two different families. (I always felt sorry for him.) He took the train all the way to Boston so he could help me move back to Ohio, and I believe he did the same thing for two of my other sisters: one moved from Illinois to Minnesota and the other one to California while the third stayed in our hometown. 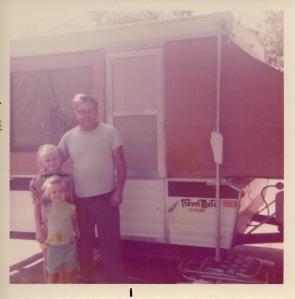 My sister and I with Dad on one of our many camping trips. (I’m the cute, short one with a stain on my shirt.)

Love of Camping
This love of Dad’s was probably equal to his love of fishing. After all, with almost every camping adventure, fishing was involved. We started out with a pop-up camper, then graduated to a small “upright” camper where I slept on the bunk that was about one foot from the ceiling. Eventually, we went a little bigger where the bunk gave me more breathing room and fewer nosebleeds. Just about every vacation involved the camper. By the time I graduated high school, we had been to almost all fifty states minus the northwest and northeast. Most of those states were seen with the camper hitched to the back of the vehicle. My sister or I would stand next to the camper and direct Dad in backing up the car to the hitch. We may not have been able to drive yet, but we knew how to direct him in hooking up a trailer.

Love of Trains
This was a huge love of Dad’s. I guess it would be after spending four decades on the railroad. This is one love I inherited from him. I even followed in his footsteps and worked for a railroad. Okay, it was a scenic railroad but still, it was one of my favorite jobs. His nickname on the railroad was Skeepo or Skeep for short. To this day, I have no idea how in the world he got that nickname. 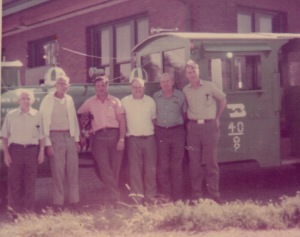 His railroad crew just outside the depot in my hometown. Dad is third from the right.

Love of Stories
Oh my word, did he love to tell a good story. His stories weren’t made up, though. They were his own experiences. He would talk about his railroad days or growing up in Iowa. The only story he refused to tell was his romance with Mom. For some reason, he was shy about that. It wasn’t until I thought of his storytelling that I realized I’ve inherited this love of his. Like Dad, I share stories of my own experiences. However, I also love to put those stories on paper, especially the ones that are purely my vivid imagination.

I realize not everyone has a dad who loved them or even showed them love, and that breaks my heart. Even though my dad wasn’t perfect, he did the best he knew how and I wish everyone would have a loving father. While my dad never told me he loved me, I knew he did from his actions. The time he spent with me working on cars, fishing, and wrestling me on the living room floor are all things I treasure. (Confession: our wrestling matches usually ended up with him sitting on me.)

One of my favorites with Dad.

What are some things your dad loves or things you love about your dad? I’d love to hear one of your favorite dad stories!