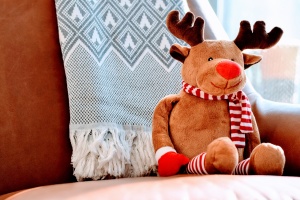 The following is a story I wrote in 6th grade as an assignment using a picture. While the story is the same, I did a lot of editing and embellishing for an online class assignment. Enjoy!

It was Christmas Eve of 1999, two weeks after my tenth birthday. Snow drifted past the bigger than life window while logs crackled in the fireplace. I was engulfed in the parlor’s overstuffed love seat that looked like it had been attacked by the ugliest flowers I’ve ever seen. My parents and my sister were all at Christmas Eve parties. I was invited to go, but I preferred to stay home with “Twas the Night Before Christmas.”

My eyes cruised along the pages, “When out of the roof there arose such a clatter—“ CRASH! Glass scattered everywhere as four intruders in black came into the room where the large picture window had been. Their dark clothes speckled with snowflakes, and all I could see were their eyes. Two of them grabbed me and one yelped when I nailed him in the shin with my pointy elf slippers. He held tight to my ankles while the other one tied me up. The other two broke a flower-filled vase and the grandfather clock. They took the million dollars hidden in each one and stuffed it into a green duffle bag. I wanted to scream but the duct tape over my mouth only allowed a soft grunt. Then the skinny one with glasses over his stocking cap opened the safe, with a fancy contraption. Another million dollars and treasure maps were stuffed into the bag. “Grab her,” the large chubby many barked. The short man picked me up and put me into a bag, tied it and carried me out with me trashing about. A mechanical sound of a door opened and I was thrown inside.

I willed my fingers to become pretzels in an attempt to free my hands. The vehicle swerved and tilted until it stopped with screeching tires. A few minutes later, something slammed against me. Then we were moving again. More swerving and tilting and crashing into objects before the vehicle braked. The door slid open, and I heard footsteps on a hard surface. A gruff voice said, “You got the goods?”

“Yeah. They were no problem,” a raspy voice replied. “Here’s the money and maps. The other packages are in the van. The smaller one is a bit feisty, though. She’s been struggling to get free the entire ride.”

The next thing I knew, two arms picked me up. They put me in a room and opened the bag so I could get some air. Everything was dark. I thought I was alone. I closed my eyes tight when a bright light snapped on and blinded me. Once my eyes adjusted, I saw an oversized black bag moving like a captured puppy. I skootched toward the bag and kicked it. A muffled growl with a return kick startled me. I swung around on my bottom, used my thumbs to pierce a hole in the plastic bag, and made it bigger with slow perseverance. My eyes became two moons when I saw my sister, Donna, next to me. I scooted around to put my back against hers. I then grabbed her wrists and felt my way around the knotted rope to untie it. Once her hands were free, she ripped the tape off her mouth with a shriek before untying my hands.

“What happened? Where are we?” Her voice waivered.

“We were kidnapped, stupid. I don’t know where we are, but they took the hidden money in the parlor.” I loosened the rope around my ankles. “How did they snatch you from Betty’s party?”

“While everyone was in the backyard, I went inside to use the restroom. They got me then.” Her hands shook as she freed her ankles from bondage. “And now I have to pee like a big old dog.”

“Shush. Somebody’s coming.” I made my way to the edge of the doorway on my knees so my slippers wouldn’t scuffle on the floor.

The door opened and I clutched his legs as my teeth sank into flesh. He barked and yanked me off. The man was as tall as a tree with a red nose. We were half scared to death. He scowled, “I’m here to help.” His hand rubbed his bit leg. “Hurry. Come with me and I’ll take you home. We’ve retrieved your family’s money and maps.” He took Donna’s hand on one side and mine on the other and dragged us along. “I’m Rudy, by the way.”

“What about the bad guys?” I asked as my short legs took three steps to his one.

“They’ve been apprehended and are in custody.” He rushed us into a red car with those gaudy foam reindeer antlers attached at the top of the front doors. “When your parents got a ransom phone call, they called Nick’s Detective Service. So Nick, my boss, sent me and my eight assistants to track you down. They rounded up your kidnappers and took them to the police.”

When we arrived at our small mansion, I threw my arms around Rudy and said, “Thank you. And thank your boss too.”

A week later, our family spent New Year’s Day searching for the treasures indicated on the maps. There weren’t any real treasures, but we had fun looking together.

The picture prompt for the story. (Yikes! The faded mimeographed paper shows my age!)